An ongoing correction in the Bitcoin market may lead the cryptocurrency lower below $10,500, according to Alexander Nikitin.

The founder of MPS Trade, an independent trading consultancy portal, spotted BTC/USD in a Head & Shoulder breakdown pattern. He noted that the pair earlier formed a set of three peaks–with the middle one being the highest–on a baseline that acted as support.

As of August 25, BTC/USD broke below the said price floor. The plunged followed with a deeper downside correction in the daily sessions afterward, leading Mr. Nikitin to turn to textbook Head & Shoulder targets to spot Bitcoin’s next support level. He narrowed the hunt down to below $10,200.

In an H&S pattern, the price typically falls below the baseline by as much as the peak’s maximum height. That allowed Mr. Nikitin to see the area above $10,200 as his “target zone.”

Bitcoin breaking out of the H&S pattern to the downside. Source: TradingView.com

The analyst also discussed the possibility of Bitcoin finding a pullback level ahead of the $10,200 level. His nearest support range–the “target#1 zone” in the chart above–coincided with levels above $10,742.

The downside warning came as Bitcoin repeatedly rejected advances above $12,000. A higher selling sentiment near the said level pushed the cryptocurrency price lower. In one instance, it found credible support near $10,500, a level that served as resistance during the Bitcoin’s bullish attempts in the first half of 2020.

One analyst called $10,500 his buying target should the price tests the level as its daily support. He also stated that a reversal above $11,700 would also prompt him to buy Bitcoin with the same bullish bias. Excerpts:

“It’s only Tuesday but this would be pretty bearish and ugly with it rounding off. My highest area of interest remains around 10.5k. I’ve sold off the #bitcoin. I bought it earlier today from last week’s sales. Will buy back at 11.7k daily close or 10.5k.” 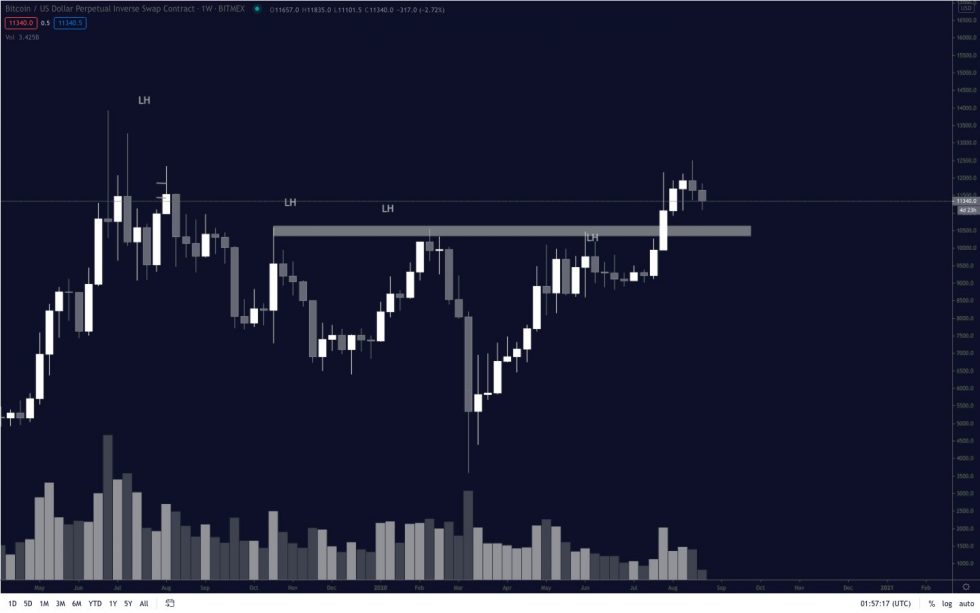 Some observers believe the cryptocurrency would retain its short-term bullish bias after the annual Jackson Hole meeting this week. The Kansas conference, which will take place virtually on Thursday and Friday, will see a keynote from the US Federal Reserve’s Chairman Jerome Powell.

Investors anticipate that Mr. Powell would adopt average inflation targeting, a move that expects to create further downward pressure on the US dollar. That will likely benefit Bitcoin, which has developed a negative correlation with the greenback since March 2020.

S2F Creator: Bitcoin Has Yet To Reach “Point of No Return”

EOS Might Be Highly Undervalued Due to Amount of BTC It Holds, Says Arca CIO