Bitcoin and the aggregated crypto market are flashing some major signs of weakness.

After making multiple attempts to climb towards the upper-end of its long-held trading range, BTC faced multiple rejections at $9,400 that halted its momentum.

All the while, altcoins have been able to post notable gains throughout the past several days and weeks, with many significantly outperforming Bitcoin.

As for where the market may trend next, analysts are noting that the cryptocurrency’s technical structure indicates that downside is imminent.

One trader is expecting a near-term movement down towards $8,600. The support here may be enough to slow its descent.

At the time of writing, Bitcoin is trading down just over 1% at its current price of $9,070. This marks a notable decline from its daily highs of $9,250.

It was previously able to find strong support at $9,200, but the buying pressure here has since evaporated. Where the crypto trends next could largely depend on whether buyers defend $9,000.

Although this is a crucial support level, it is important to note that it has been broken on multiple occasions throughout the past few months.

Each break below it has proven to be fleeting, however, and followed by a move back into the range.

One analyst recently said that he is expecting the next downside movement to be more decisive than those seen previously.

“The deeper we get into this BTC semi-slanted descending triangle-like thing the more likely I think it breaks to the downside. Usually the deeper we go into the nose of shapes like this the more often we see it break down. Bullish breakouts are more often 2/3-3/4 full.”

Trader: BTC Likely to Reel Towards $8,600 Before Finding Strong Support

As for where Bitcoin is likely to go next, one analyst explained that he is watching $8,600.

“BTC HTF Update: This seems to be the real deal and it currently seems as though a close below this support is going to happen on the daily, $9000 really has to show some strength… Honestly, I have a feeling as though $8600 is incoming.” 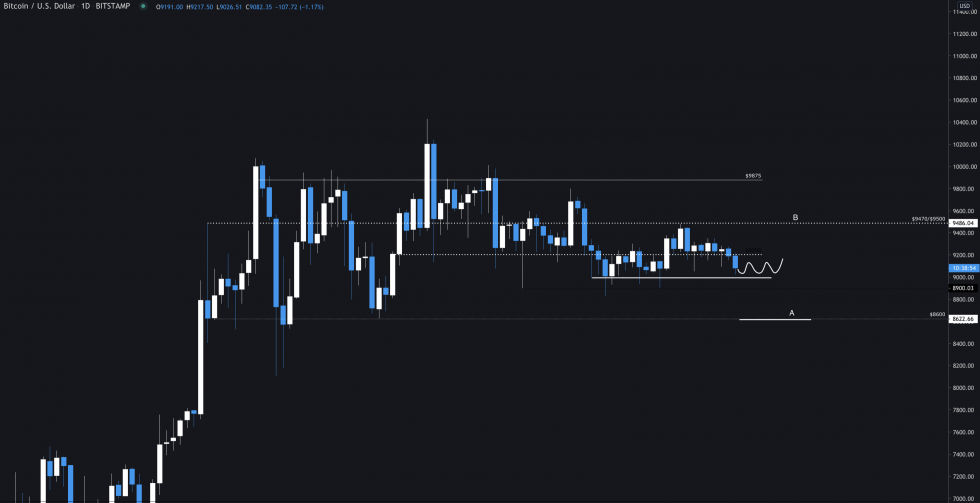 If BTC losses $9,000 and struggles to find intense buying pressure at $8,600, this next decline could mark the start of a far-reaching bear market.

How would Bridge Oracle help to shift to Web 3.0